New Player Help for King Arthur: Knight's Tale covers various information that will help a player understand the basics of the game's mechanics as well as recommended things to do before starting the game. The purpose of this page is to help both new and veteran players of Turn-Based Tactical, RPG to further understand the game and to know what it has to offer.

In King Arthur: Knight's Tale, there are more than 50 unique missions and you can also choose from more than 30 heroes of 5 different classes. You can gather your own Knights of the Round Table and meet all the famous Arthurian knights and heroes. You can settle disputes and also grant favors to convince your heroes to remain loyal to you. You must be careful as there are cases where they can leave the Round Table or even turn against you depending on the choices you make in the game. In battle, your heroes could be injured or even be killed permanently so it is important to pay attention to your enemies' strengths and weaknesses and make use of your team's skills and abilities to attack accordingly, make use of the terrain and traps within the combat area to your advantage.

Planning ahead of time before missions is crucial, as the composition of your group can change the outcome of the encounters you will face. Make sure you double check your hero composition as well as the skills, traits, and gear before moving forward on a mission.

It is also recommended to create a team that has a diverse class instead of focusing on one class. For example a Defender would maybe need a Champion for some DPS assistance or even a Marksman for some ranged cover. You can also include a Sage that can buff your team, it all depends on the skills you have set and the enemies you'll be facing, remember that teamwork is essential.

There are a total of six available classes in King Arthur: Knight's Tale:

All heroes have different skill sets and a hero's class determines their base stats and their ability to wear certain types of items.

King Arthur: Knight's Tale also incorporates base management elements within the game to provide an extra layer of gameplay besides from the adventures and turn-based tactical combat. Camelot is well known as the mythical castle from the Arthurian legend, and this will serve as your main base of operations. You'll be able to manage your heroes and the economy, collect gold and building resources to manage things in Camelot. Be careful how you spend your gold and resources as gold can be a costly adventure and resources are scarce.

Starting from scratch, you will have to rebuild the whole castle and its main buildings first, and it will cost gold and resources, including the upgrades. Carefully plan out what you should upgrade and rebuild first, rebuilding the castle should be a slow and thoughtful process. 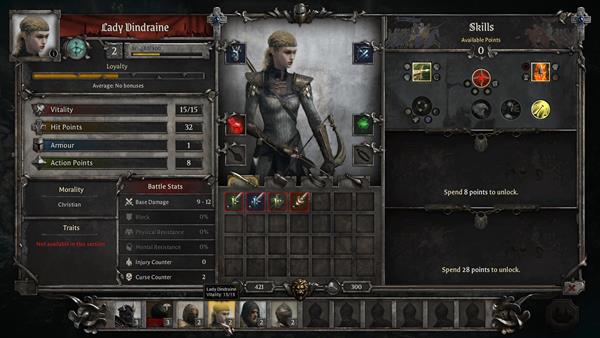 Every Hero has a Loyalty Chart which represents their commitment to their leader, Sir Mordred. If Sir Mordred's (Morality) alignment is similar to a hero's alignment, then the hero will receive bonuses, if not, the hero will suffer penalties. If Mordred becomes the very thing the Hero stands against, they will leave your service forever.

Your Heroes receive two Skill Points each time they level up. You can spend your SP on Masteries to enhance your existing abilities or new passive Skills. You can gain additional Active skills by unlocking higher skill Tiers.

During your journey, you'll have to make tough choices that will affect the outcome of the story and your allied Heroes' loyalty.

On the left-hand side of the chart, you can see your previous Morality Event choices. It gives you an overview of which alignment or decision you chose during triggered events.

On the right-hand side of the chart, you'll find a tree that represents the alignment you are going for and the different features that you can unlock along the way. You can discover morality abilities, and Heroes that are unique to that alignment.

As you begin the game, Sir Mordred starts off with a Neutral alignment. On the vertical axis, your alignment can go from being a Rightful ruler to a reckless Tyrant, while on the horizontal axis, you can become a devout Christian to being the follower of the Old Faith. The choice is yours in King Arthur: Knight's Tale.