Walkthrough for King Arthur: Knight's Tale features a detailed guide that aims to help players complete all the Locations and Story Quests, as well as guides on Enemies, Bosses, NPCs, and Items that are encountered in the game. This page will mainly focus on providing a detailed walkthrough for the main campaign or story of King Arthur: Knight's Tale. For a list and guides on quests, click here, and if you want to check an overview for a recommended progress path, you may visit our Game Progress Route.

Act 3 - Secrets of the Sidhe

Act 4 - Invasion of the Fomorians

Prologue is the first Main Mission in King Arthur: Knight's Tale. The Prologue mission is part of Act 1 and it is located at Camelot. This is the first introductory Main Missiont that will include a number of tutorial promps. Completing this mission unlocks the next main mission, Among the Ruins. For a list of all available missions, click here.

NPCs in the Area

"The Lady of the Lake has brought back King Arthur's nemesis, Sir Mordred. Was it the right choice for her to do so? Or will the nightmare and chaos begin to engulf the mystical land of Avalon?"

"I am Modred and I was reborn on the mystical island of Avallon, the resting place of the falling knights. A vision told me my purpose: to find and destroy King Arthur.

I woke up in a ruined caslte, a reflection of the real Camelot. This is my castle now. I am still trying to understand the nature of the powers that brought me here, but meanwhile I have a new reealm to build and an old enemy to kill"

Events that occur during the Main Mission, Prologue

This event occurs towards the end of the mission once Sir Tewelyn is defeated. This decision will affect your morality. Choosing to claim the throne room will add to your tyranny while making the Round Table increases your rightful morality. 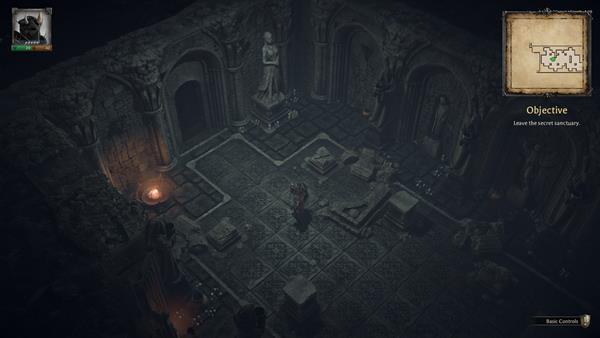 This mission serves as a tutorial mission for the Early Access of the game. You begin to play the game as Sir Mordred and you are tasked to escape the sanctuary. Before heading to the guard's room which is straight ahead, click the tutorial on the lower right which tells you the basic controls of the game. When you're done, go straight and you'll encounter your first enemy. You'll encounter one enemy in the next room which is just a Guard, he only has 5 Vitality, so hitting him with about 1-2 strikes from Sir Mordred will do the job. 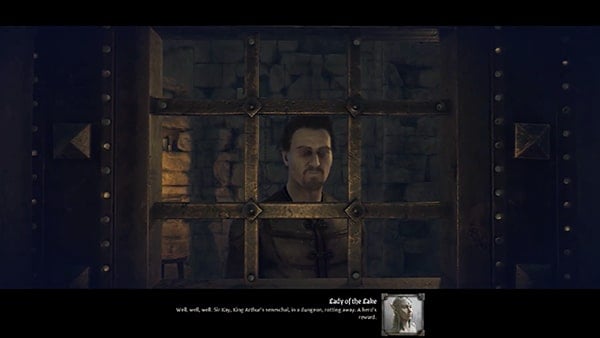 After killing the guard, you'll hear a man who asks for your help to free him from his cell, go east and open the door leading to the prisoner's cells. You'll find yourself in the dungeon. Inside this section, check the first cell on your left to find a body that you can loot, loot the barrel in the cell. The other cell on the right and the other two ahead won't have anything, so just go straight and approach the cell at the center to talk to the man. You'll find Sir Kay, King Arthur's foster brother, have a conversation with him first, and then eventually, you'll let him out of the cell. Now, go back to the previous room where you encountered the guard and a cutscene will trigger where Sir Kay gathers his armour - he'll automatically join your party from here on. 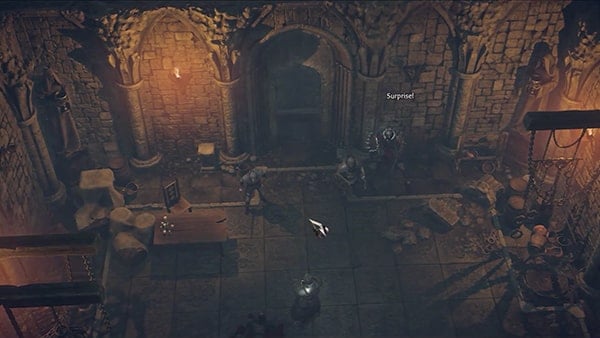 After Sir Kay gathers his equipment, approach the front door and interact with it. Two Guards will come out and the second combat encounter will trigger. Here, you'll have quite the advantage since Sir Mordred will position himself from behind the guards.  Awitch to Sir Mordred and attack the guard next to him, you'll instantly kill the enemy with a backstab. From here, you can reposition Sir Kay closer to the remaining enemy and strike him to complete combat. 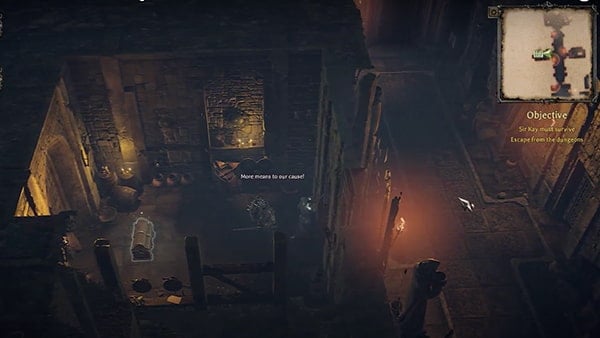 After the battle, go to the corridor and open the first cell on your left, you'll find a chest that you can loot. Take note that the loot that you acquire from chests are random. Inside the chest, you may acquire the following: Bless Potion, Rune of Sharpness (One-Handed), and some Gold. There's nothing inside the cell that's opposite to where the chest was, so just go back to the corridor and go to the Warden's room to trigger the third battle sequence. 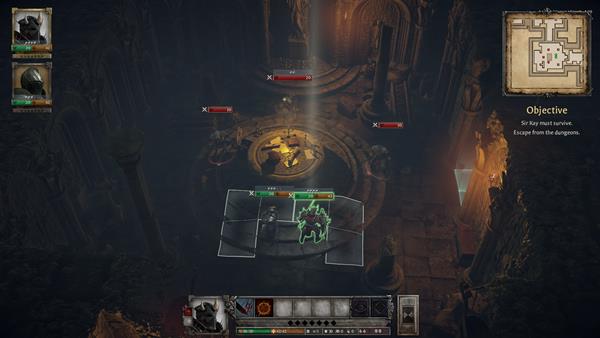 A cutscene will first trigger before the battle starts. Now, if you missed it, make sure to read the tutorials that are indicated on the bottom right-hand side of the screen. In this sequence, you'll find a tutorial on how Overwatch works. Overwatch basically uses the remaining AP (Action Points) and you choose an area where your hero keeps watch, and when an enemy walks towards the area your hero is watching, then they'll automatically attack them. In this battle, you'll fight against the Warden and two Guards.

Sir Kay has low armour at the moment and you need to keep him alive until the mission ends, so what you want to do is have Sir Mordred and Sir Kay stand next to each other and use Overwatch to cover their sides. This way, when one of the guards walk up to either one of them, you'll get a free hit and when it's your turn again, you can easily kill them. If you're lucky, the guards will position themselves in a straight line, allowing Sir Kay to use Cleave to kill both of the guards. While Sir Mordred can Cast Stigma to the Warden and follow up with an attack. Once they are cleared, loot the room. 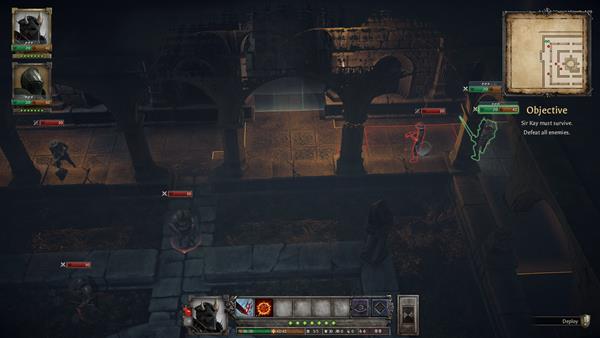 From the Warden's room, go east towards the exit and loot the chest before going up the stairs towards the castle grounds. Inside the chest, you can find Rune of Wounding, Rune of Piercing (One-Handed), and some Gold. Now, go up the stairs and another cutscene will trigger. Read the tutorial regarding predictable battle, basically, when you step onto the red cells, you'll be able to deploy your units in certain cells before starting the battle. Here, you'll be fighting two Guards wielding a crossbow and two melee guards as well. The trick here is to take out the crossbow-wielding guards first. You can easily take out the one on the right first. After you've deployed the heroes, click Finish to start the battle - after the battle, a cutscene will then trigger and you'll be at the center castle area. At this point they will prompt you with a tutorial for Predictable Battle: Exploring the area before battle rewards you with information. The more deployment areas you discover, the more tactical options you will have when the combat begins. You can select any area you discovered for deployment.

With that tutorial in mind, send your characters to any deployment area to begin. It is recommended that you position yourself behind the guard to the right from where combat begins. Once you are done taking a look, deploy your characters to a green zone spot and bein combat. Enemies will also take turns approaching. As they approach, you can clear them. After they are cleared you can make your wy to the next room, the throne room. 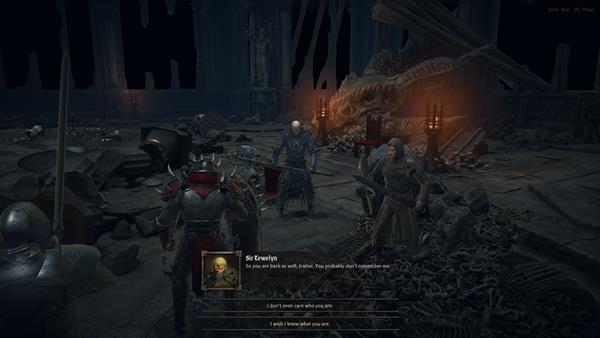 Before the final battle starts, you'll have a little chat with Sir Tewelyn, who was once a noble warrior who's now been revived as a Lost One in Avalon. After talking to him, the battle starts where you'll face him and three enemy units, two melee guards, and one ranged. Again, it's wise for you to take out the ranged guard first so that you can avoid any supporting damage from the enemy. You can have Sir Kay move in and have Sir Mordred act as a shield for him since he has more armour (depending on if you took less damage from previous battle encounters), also, Sir Mordred is a Defender, so he can take as much as damage and occasionally, he uses his shield to block enemy attacks. 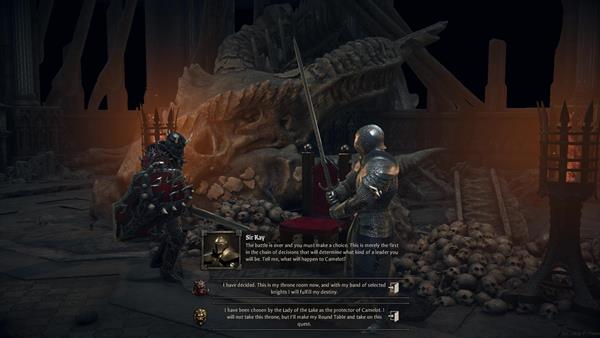 After killing Sir Tewelyn and his men, you'll now have to choose what you want to do with the throne. You can start off with being a Tyrant where you take the throne or be Rightful, where you preserve the throne and instead, make your own Round Table and serve the Lady of the Lake as protector of Camelot. Either way, your choice will contribute to your Morality. And each morality unlocks certain features such as Heroes, Skills, upgrades for Buildings and many more - After choosing, you'll end this mission and you'll be able to access the game's main hub where you can view your Heroes, visit Camelot to reconstruct Buildings and to take the next mission which is Among the Ruins.

Previous: n/a
Next: Among the Ruins